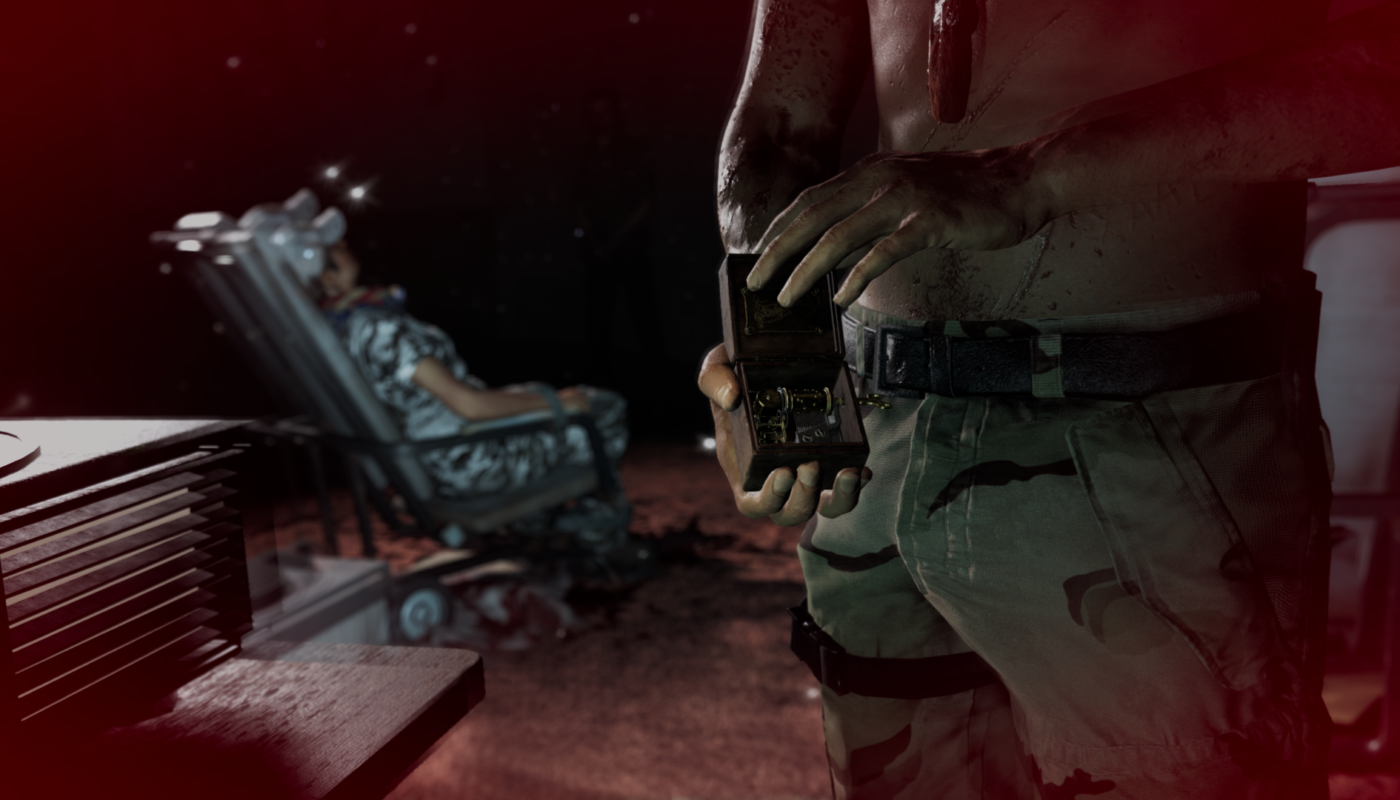 Jacob didn’t have to wait long for his luck to come. Just a few days after the meeting he had attended at the compound, his men informed him that several wolf decoys had been destroyed. After a brief investigation, it was confirmed that this was the deputy’s work.

The Whitetails could also have been the cause, putting obstacles in Jacob’s way since he had taken over the area. It was basically a resistance militia founded by a local man named Eli Palmer. The elder Seed did not fear them, but he knew the effect that a few particularly motivated people could create. Eli and his community were among the problems he promised himself he would deal with in a hurry as soon as the opportunity arose.

For now, all his attention was focused on the deputy and sheriff who were running around causing casualties to the cult. Neither the Holland Valley resistance nor the Whitetail Mountains militia had any chance of success against Eden’s Gate, but if the two law enforcement officials joined them and, worse, brought the two entities together, then it was a safe bet that motivation would increase within the opposition, which would then fight in a much more rabid manner. It was imperative that these two individuals be neutralized quickly, especially since the list of destroyed equipment and released hostages across Hope County had been climbing furiously for the past few days. Since she was in his area, Jacob took the lead and decided to invite her to meet him.

Grabbing the radio handset from the Camp Breakthrough office, he tuned into the frequency John was using to communicate with her and called her directly.

—  There’s someone out there… pretending to be a soldier. They are killing our brothers and sisters, and putting the Project in jeopardy. I want this coward to know that they have my attention… My hunters are coming for you. There’s nowhere you can run.

A sadistic sneer played on his lips as he interrupted the transmission. Less than a minute later, the chosen were sent after the policewoman.

An indescribable excitement overcame Jacob as he entered the conditioning room of the Grandview Hotel to watch the scene. Pratt was taping the sleeping woman’s wrists together, riveting her to her seat as were the other two recruits before her. Jacob moved closer to observe her, gently but nonetheless firmly pushing aside his new personal servant. She was just as he remembered her : bland, banal, uninteresting. It was hard to believe that such an insignificant person could cause such damage to the well organized and well-staffed Project.

Her brown hair was tied, she had traded in her deputy’s clothes for beige cargo pants and a plaid flannel shirt. The men who had disarmed her when they brought her back had been amazed at the arsenal she carried. She was indeed equipped with a sniper rifle, a heavy machine gun, a handgun and three grenades, which was quite a bit of weight to move, in addition to the huge backpack that contained some personal effects and food. Jacob slipped two fingers under her chin to lift her face and better examine her. She still looked young, but her drawn features showed the intense activity she had been doing since her arrival in Hope County.

Jacob retreated to the back of the room once again. He waited until the three guests had regained consciousness before beginning his usual speech, as the lights dimmed and the screen lit up, displaying the endless sequence of vile images of conditioning. This time, he stayed throughout the projection, curious to know the outcome for the deputy.

The first part containing the photographs finished, the plan of simulation could start. This time it was a video shot in such a way that the viewer was the protagonist, in the first person. Thus, the identification with the protagonist was almost assured, which favored a full immersion in the role.

The scene opened on the projection room whose screen always displayed an image of a wolf tearing up its prey. As a countdown began, the protagonist got up from their seat, observed the surroundings and then took hold of a revolver at their disposal. At first hesitant, they understood their duty was to sacrifice the weak, that is to say any person hindering their way. So they executed, one after the other, the occupants of the room, each killing adding time to the clock.

The elder Seed’s eyes were riveted on her. Her reaction had been immediate, she had engaged a movement resembling an attempt to stand up, obviously aborted by the bonds which held her to the chair.

Then the protagonist crossed the step of the door and headed in the corridor, taking along an automatic handgun, also laid out to their attention. The next room opened on a staircase with different levels, on which were posted armed men who were targeting the protagonist. They had grasped the stakes of the situation and were now shooting on sight to progress through the maze of corridors and adjoining rooms. Jacob’s voice, recorded in the background, encouraged them to eliminate the weak and congratulated them on each additional kill.

The deputy clenched her fists and each shot fired by the protagonist caused her to jump, as if she were holding the weapon in her own hands and feeling its recoil.

The next corridor offered a shotgun, much more powerful than the previous weapons. At the next crossroads, a curiously dressed man came out of a blind spot and rushed at the protagonist, who immediately killed him. He was soon followed by others who also tried to kill the hero along the corridor leading to the next room. In front of the doorway stood proudly an automatic machine gun, which offered a higher level of accuracy and speed, and which they immediately equipped themselves with.

Now she hardly blinked, glued to the screen as if her life depended on it.

The next scene took place outside, in the courtyard of a large building whose wrought iron gate read “St. Francis Veterans Center”. Men in military fatigues always appeared out of nowhere, sometimes hidden behind some low walls, sometimes totally exposed, and fired at the actor. Jacob’s prerecorded voice was shouting his order now: “Kill the weak !”, and the protagonist’s pace was quickening in concert.

Jacob lookd at the deputy. She was suffocating, her pulse had quickened considerably and sweat was pouring down her temples.

After they crossed the building’s door, a new machine-gun attracted the glance and the covetousness of the protagonist, who seized it to continue their ascent towards the victory. A new room made up of stairs on different levels was then offered to their sight and they quickly and mercilessly eliminated the men who were there and put them at gunpoint. When they had passed all the steps leading to the top, a new maze, downhill this time, brought them closer to the end of the ordeal, whose countdown was still running.

A last weapon at their disposal, a last corridor to cross, a few rooms in enfilade and many men to sacrifice, then the hero found themselves in the first room, the one which projected the atrocious images. An exit appeared and behind it, a final target to execute. This time, the human being to be shot had no face, only a military fatigue dressed body and a weapon aimed at the actor. The protagonist shot him without mercy, thus ending the simulation video.

The policewoman let out a howl of rage, her fists clenched so tightly that blood no longer seemed to flow from her bleached hands.

The three recruits convulsed one last time in their seats before losing consciousness, stunned by the intensity and violence of the images as well as the bliss dose that had been injected into them beforehand. The deputy was the last one to let herself be carried away by lethargy. She had fought to the end, Jacob had been delighted to see that she had not only been psychically involved, but also physically, as her reactions throughout the projection had shown. This meant that she was totally receptive to the treatment and conditioning, which pleased him. He had found the person who would definitely rid him of the Whitetails. And on top of that, he would have the immense pleasure of turning away a law enforcement official.

His happiness was cut short by outbursts and gunfire from outside. He rushed to the nearest window to see that the building was under attack. The damn Whitetails, again and again. They were recognizable by their military fatigues overlaid with a deer antlers drawing and the name of their pseudo militia.

An idea came to him. A new kind of conditioning, a life-size training. He grabbed his handgun and mercilessly shot the two sleeping captives, but not her. He needed to test his theory. He knocked her out with the butt of his gun before exiting the room to join his men at the back of the building. They then used the service door to slip away quietly.

The human kingdom is a fascinating thing, when you start to delve into their heads a bit, you’re surprised at what people are capable of doing under the right circumstances. You are familiar with the term classical conditioning, aren’t you, deputy ? That is when a particular stimulus, let’s say a song, triggers an uncontrolled reflex. In this case, to train. To kill. To sacrifice.