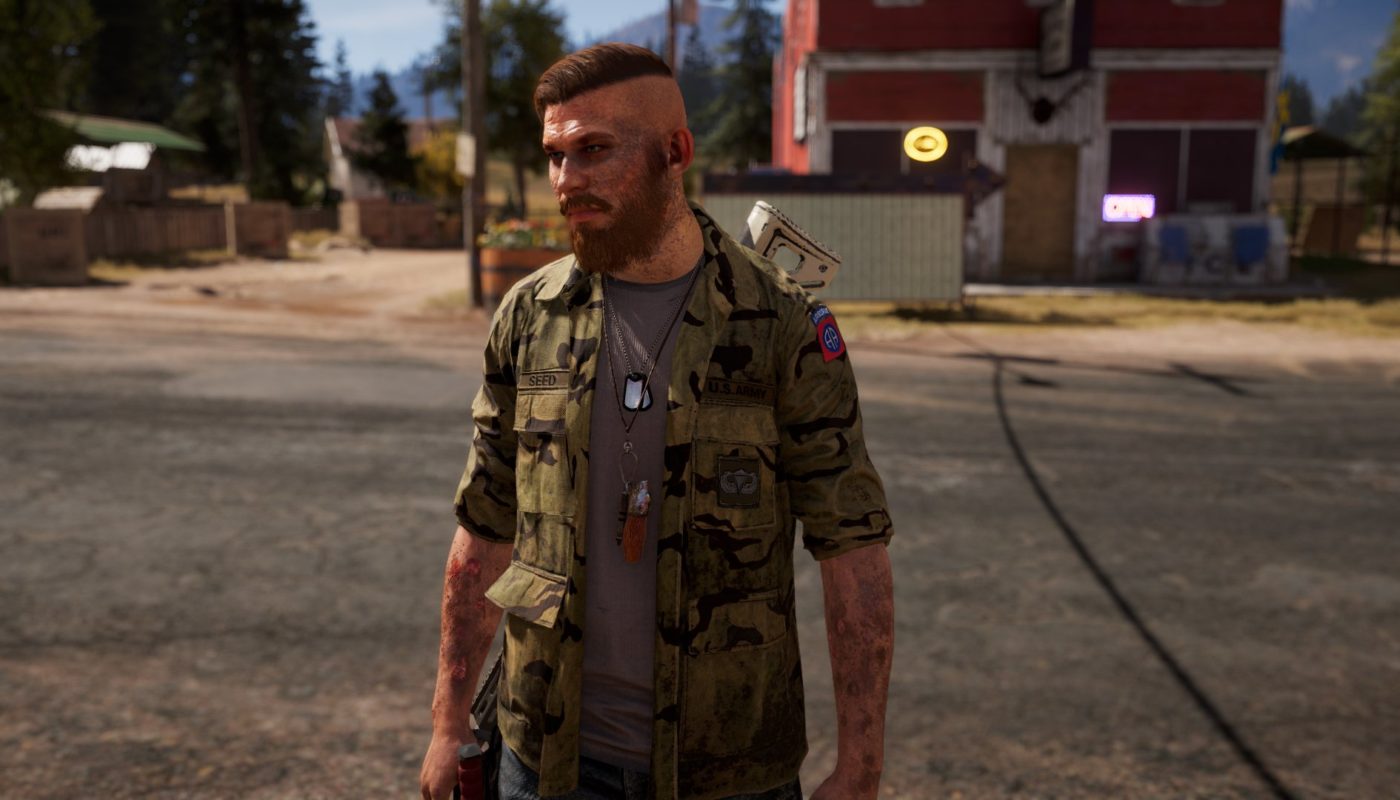 Jacob, lurking at the back of the room, watched in silence. The three captives sitting securely in their seats exchanged panicked looks. Pratt wanted to remain proud, but he could no longer contain the terror instilled in him by the elder Seed and his war movie treatment. The lights in the room suddenly dimmed.

Now the large screen was the only light source in the room, covering most of the wall. The first image appeared. A deer, lying on its side, shredded, gaunt ribs exposed. A second picture replaced the deer. It showed a wolf devouring its prey, lips curled up into sharp fangs, instilling fear. The captives were fidgeting in their chairs, trying in vain to undo the ties that held their wrists to the armrests. Satisfied with the spectacle and the reactions it generated, Jacob stepped out of the shadows to stand in front of the two men and the woman and speak.

—  This world is weak. Soft. We have forgotten what it is to be strong. You know, our heroes used to be gods. And now our heroes are godless, weak, feeble, diseased.

A new shot of a wolf tearing apart its prey appeared.

—  We let the weak dictate the powerful and then we are shocked to find ourselves adrift. But history knows the value of sacrifice. Of culling the herd, so that it stays strong. Over and over, the lives of the many have outweighed the lives of few. This is how we survived. And we’ve forgotten…

He stared at each spectator in turn.

—  And now the bill has come due. Now, the collapse is upon us. And this time, the lives of the few outweigh the lives of the many. And when a nation that’s never known hunger or desperation descends into madness, we will be ready.

He picked up an object and rewound the mechanical key as he continued.

—  We will cull the herd. We will do what needs to be done.

The second he opened the small wooden box, a familiar melody came out and cut through the silence and coldness of the room. After a few seconds, it was overtaken by the voice of Tony Williams, which blared through the speakers and enveloped the entire room and its occupants. Jacob smiled as the prisoners shook violently in their seats.

He was anxious to know the outcome of this first trial. He hoped that Staci Pratt would live up to his expectations. What a delight and pride to turn a law enforcement official against his own principles of justice. He was disappointed that deputy Hudson had been turned over to John and that the marshal had gone to Faith, but two officers he could get his hands on were still running around. All he had to do was find them first, and he would be happy to take care of them. He left the room full of hope. In the meantime, he had to make sure that the training of the judges was going well.

The next destination of the day was Elk Jaw Lodge, an old shack that had been converted into a genetics experimentation center. Feeney, a former doctor who had been fired for immoral practices, had joined the cult a few years earlier. His studies in genetics coupled with his talents as a chemist served both Faith’s and Jacob’s interests. Indeed, black henbane was cultivated in the Henbane River area to be distilled, transformed into bliss and consumed for its hallucinatory effects. In the Whitetail Mountains, it was used for more scientific but equally despicable purposes. Feeney was charged with turning ordinary men into superhuman warriors with a compound whose formula was still under development.

Most of the experiments were carried out on wolves captured by Jacob’s henchmen. They were first brought here to Elk Jaw Lodge for a rudimentary examination to ensure their fitness. Only healthy wolves were able to assimilate and withstand the bliss treatment, and the weakest were killed.

Feeney then injected them with the cocktail, the concentration and dose of which depended on their age, height, and weight. The approach lasted only a few days. Soon, the canines showed signs of increased aggression. They were then sent to the Breakthrough camp where a guy named Wayan oversaw training them.

The regular feeding of the compound not only increased the animals’ cruelty, but also their docility, which allowed Jacob and his men to use them as attack dogs. The effectiveness of these creatures was obviously greater than that of an ordinary Doberman, given their size, their natural predatory instincts and the mixture that ran through their veins. The beasts went from being wolves to being judges.

To identify those ready to serve, Wayan marked them with a huge red cross extending from the top of the head to above the chest.

Jacob walked directly to Wayan, who was busy throwing carcasses over the fences of the pens to feed the monsters.

—  How are we doing with these specimens ?
—  They’re almost ready. The biggest one, in the corner over there, is particularly aggressive. She tried to eat my hand this morning. We need to stabilize the formula to make them more docile.

—  I thought they were totally submissive…
—  That’s the goal, eventually. For the moment, their predatory instinct cannot be radically annihilated, so we are also in danger when we manipulate them. But this is also what makes them interesting. Just keep in mind that they don’t really differentiate between their trainers and the enemy, and exploit them accordingly, until Feeney fixes this hiccup.

—  Put this in writing for me, I want us to be able to plot out all the preparation steps.
—  Will do, Jacob. Ah, the Father called. He asked you to call him back about the fugitives.

Jacob’s eyes lit up. He walked briskly into the room that served as his office and dialed the number of the complex. When the man on the other end of the line put his brother on the phone, he didn’t even waste time in unnecessary greetings.

—  Do you have them ?
—  No. But the news about the female deputy was not long in coming. Apparently, that old wreck of Dutch has taken her under his wing.
—  Roosevelt ? The survivalist who’s been holed up in his bunker for months ?
—  That’s right. They might slow down the expansion of the project. He gave her a gun and she went to Fall’s End. Rumor has it that she talked to Mary May Fairgrave, the bar owner, and “Pastor” Jerome Jeffries, and that their goal was to form a resistance team.
—  Don’t worry, their little rebellion has no chance of succeeding.
—  I’m not worried at all. God has guided us here, he stopped them yesterday and he will continue to watch over Eden’s Gate. I just hope that he will deal with these sinners quickly. Several bliss silos were destroyed in Holland Valley. John is furious. I hope with all my heart that he doesn’t let his old demons get the better of him and that he knows how to contain himself. This may well be his trial coming up.

The euphoria that had seized Jacob when he picked up the phone immediately subsided. He hoped John would contain his rage, if he got his hands on the fugitives before he did, God knows what he could do to them. If they went through his bunker, they would certainly not come out unscathed and would no longer be fit to follow conditioning and serve his militia.

He hoped that the female deputy would quickly leave his brother’s area. Of course, individuals willing to invest themselves were needed who in harvesting and community service, but Jacob did not want to waste the potential of already trained officers, which was generally greater than the one of civilians who could handle some basic tasks.

He greeted Joseph and hung up, disappointed with the turn of events.

He spent the rest of the day wandering the woods, going from one facility to the next to inspect the wolf decoys his men had set up, as well as the cages in which the attracted specimens were automatically trapped when they entered. At least this procedure was going smoothly.

His henchmen were doing quite well in the seizure, especially those he had named the chosen. They were the elite of his militia. They never missed their targets and their missions ranged from the execution of sinners to the capture of animals for experimentation and the elimination of unproven devotees or those who doubted the Project.

The members of this unit were always hooded, so that their identity was kept secret outside the intervention group. Invisible, they blended into the vegetation, and it was virtually impossible to detect their presence until a bliss poisoned bow arrow or bullet hit the victim. He sent the chosen ones as a last resort or when he wished to ensure that the mission in question was accomplished successfully or discreetly. Jacob himself had trained these men, all of whom were army veterans, like himself. His specialization in the sniper unit made him just as dangerous and precise as they were.

For as long as he could remember, he had always loved and respected nature, including its cruelty. As a child, he would spend hours alone in the forest near his family’s home. He would build huts, carefully observe the animals he came across, and study the way vegetation grew in the direction of the light.

He had always been a loner and, apart from his two brothers, did not mix with other children. Of course, he had been forced to socialize a little as he grew up, but this deep-seated trait of his personality still remained, and he felt much more at home in the woods than in contact with civilization and other human beings.