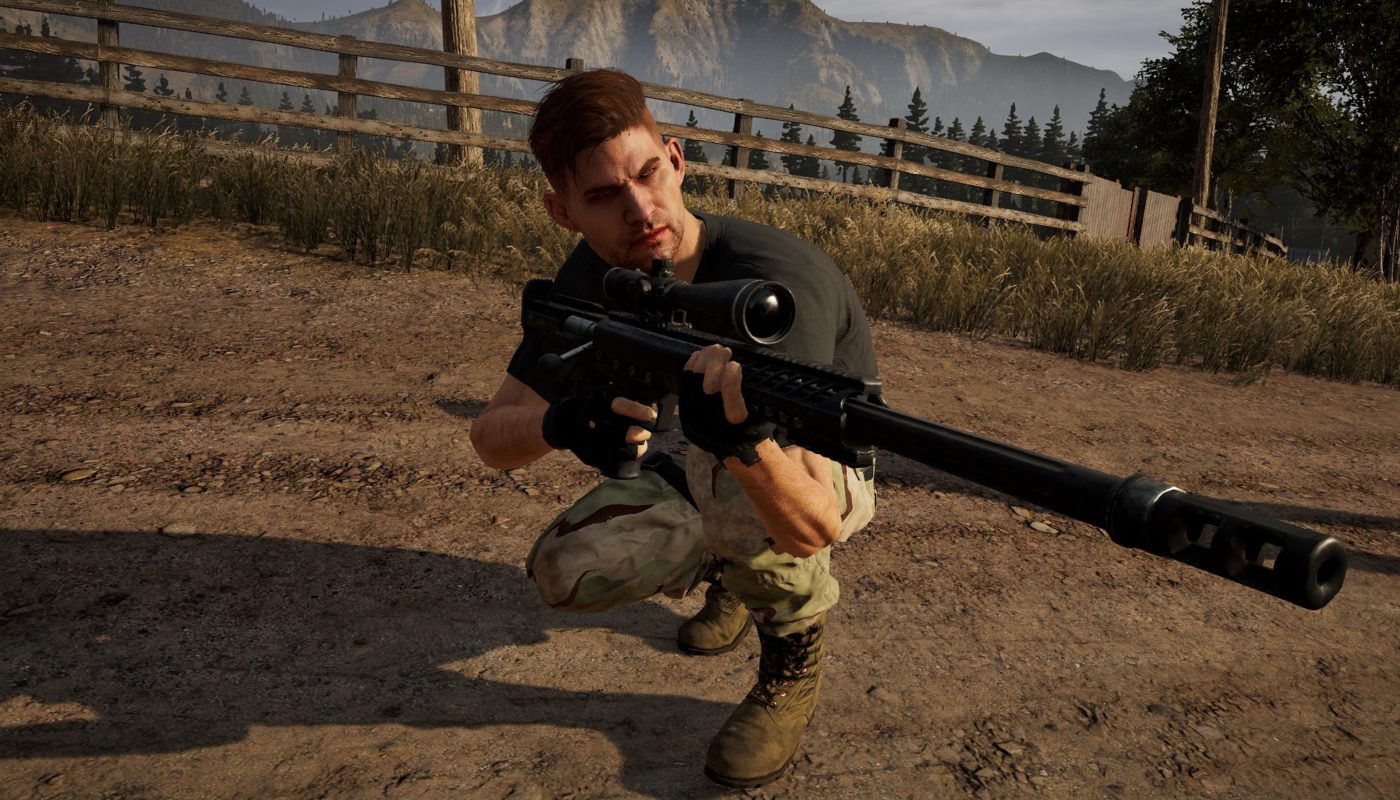 The 82nd Airborne is back on the field, and among them, Jacob Seed. While he has physically recovered from the burns of his previous mission, the same cannot be said for his mental state. Despite this, he has done everything to be considered fit for combat and to be able to support his brothers in arms and free the oppressed.

Because that is what it is all about, the commander explained to them that this time the goal is not to eliminate the local warriors but to stabilize the situation in the Sunni west. U.S. officials have said that there is a link between al-Qaeda and Saddam Hussein’s government, that the Iraqis have weapons of mass destruction and that they must be stopped before they use them. While most of the Marines and Army soldiers deployed have no doubt about the veracity of these claims, Seed begins to suspect that the main purpose of one mission after another is to assert U.S. authority over the countries it besieges and then tries to rule, while profiting from the resources recovered.

For some time now, his vision of the world has changed somewhat. Is it really always necessary to defend the weak? Doesn’t their presence destroy the efforts of the bravest? It is clear that with each battle, the will to defend the oppressed causes casualties in the ranks of the liberators, weakening the regiment a little more each time. The losses are considerable, for a result that never lives up to its expectations.

As the column of three vehicles made its way through sand and gravel towards the small town of Fallujah, a tactical outpost, an air of deja-vu came over Jacob. The atmosphere in the Humvee is good-natured. It’s always the same: during deployment, everyone is fresh and in the mood to make dirty jokes. Then gunfights or IED search sessions occur, during which one or more comrades are almost always lost. And then the faces change inexorably and become serious. Jokes are still made, but without real conviction. Their goal is no longer to amuse the comrades but to try to evacuate the palpable tension and the weight of guilt, often in vain. Most of these young soldiers enlist with the aim of killing. But the truth is that when the opportunity presents itself, no one is more sure of their convictions. The trigger of the weapon becomes surprisingly difficult to pull, as if the mechanism itself has jammed.

As the Humvee nears the city, silence falls among the men. Jacob glances around at the rest of the team. Johnson, sitting across from him, stares stubbornly at the floor of the vehicle. Like Jacob, he’s had the opportunity to see the damage in the Fort Bragg VA clinic. He’s seen too much horror for a 30-year-old and didn’t jump for joy when the new deployment was announced. Next to him is Cooper. He is very young, barely of age, and excited to be in the thick of things. He continues to talk to himself, perhaps to unload the atmosphere. Beckett, stationed at the turret, is new to the unit, having been added to them that morning. He is not very talkative or expressive, but anyway it is not easy to communicate with the inside of the vehicle when assigned to the machine gun. And then finally, the soldier Ramadani, who is standing next to Jacob, has been praying since the convoy left. He is the only Muslim in the group and is often teased about it, but he never picks up on the derogatory remarks of some comrades, fortunately.

The convoy finally slows down and the men exit one after the other through the back rags of the Humvee. The city of Fallujah takes shape before their eyes. It is composed of many blocks with dull facades, most of the time surrounded by clay walls. The mission is simple: to check each house until the whole city is considered secure. The soldiers’ goal is to search every nook and cranny to reveal any cache of weapons or shady individuals potentially affiliated with al-Qaeda. Unit 2, like the others, has established a tried-and-true, finely tuned procedure: Ramadani leads the way, responsible for watching for any movement from the front of the group and from the rooftops and upper floors. Johnson and Cooper watch the flanks, Jacob the rear, while Beckett, armed with his long-range rifle, has climbed to a rooftop to oversee the group’s advance with a bird’s eye view and report any suspicious activity.

As the unit moves through the narrow streets of the city, moving a cloud of dust with it, civilians come out of their homes. It’s hard to tell if it’s out of friendly curiosity or distrust. In any case, the soldiers do not go unnoticed and their passage causes many whispers. Among them, several children. Seeing them there reassures the unit. Usually, when al-Qaeda men are in town, the adults don’t let the kids out. The soldiers are aware, however, that the enemy can be hiding anywhere, in the form of a grieving widow or an old beggar. Sometimes the task is given to a kid who hides an explosive device or a gun in his clothes. In the latter case, the suicide bomber usually does not cause too much damage. Because the children are not trained, they fire off bursts in all directions but rarely hit their target. Toddler bombs are more problematic because no special maneuver is required to activate the device. In both cases, the operation ends with the death of the perpetrator.

Unit 2 progresses slowly but surely through the city. The time needed to secure a block depends on its configuration, the number of floors, rooms and civilians occupying it. However, the team is relatively quick and the checks follow smoothly. A few families protested from time to time, but the few Arabic words learned by the troops allowed the military to calm them down quickly, legitimizing their presence as protectors.

Ever since they entered the city walls, Jacob has felt a gaze following them. He could not identify its source, but it is certainly not an insurgent. If it was, the AK-47s would have been fired long ago. However, this feeling of being spied on has been going on for several hours now, and it has never diminished. Whoever is making the observation is motivated and patient, which intrigues him.

As night falls on Fallujah, it is time for the three groups to join the camp set up outside the city by the fourth group that came to reinforce the team during the security procedure. The men of Unit 2 went to the previously occupied Humvee to retrieve their personal belongings and set them up at the camp. Feeling the gaze still on him, Jacob pretends to be looking for something in particular and begs his comrades to go ahead, explaining that he will join them soon. Lurking in the back compartment of the vehicle, he waits a few minutes. It wasn’t long before he heard the sounds of movement on the rocky surface surrounding the Humvee.

Leaping like a devil, he hurls himself onto the road, gun pointed at the figure whose footsteps have given away his location.

A cry of shock comes from the mouth of the child standing in front of him. Jacob instinctively steps back, the boy still in his crosshairs. He can’t be more than five or six years old and his frightened look shows his awe. He certainly didn’t expect the soldier to have spotted him and come upon him like this. He quickly snaps out of his lethargy and takes a step towards Jacob, who backs away again, holding him at gunpoint.

The kid does not answer. He has certainly understood the content of the message with the borrowed tone, because he stopped net.

The child remains motionless, the soldier tries to make himself understood otherwise. With a gesture of the hand, he mimes a horizontal circle. The kid seems to have understood, he presents his back to Jacob who approaches prudently. He risks big, if the small is equipped with an explosive device, he will not escape from it. But it is better that it happens here, outside the camp, and that only Jacob is touched if the child is really armed. Taking a big step, he reaches the kid and immobilizes him with one hand while he searches him thoroughly with the other. No trace of explosives, no firearm, not even a knife. What could this kid be doing here, alone in the night, so close to armed strangers ?

Reassured, he sits down on the deck of the utility vehicle, his eyes riveted on the still immobile child.

— What are you doing here, all alone ? Don’t you have parents ?

The toddler obviously doesn’t answer, but he has turned around and is now also staring at Jacob, as if captivated. The soldier observes him more closely. Judging by his clothes and his thin build, he must not be living large or eating well. His sunken face shows a difficult past, but his pupils are bright with curiosity. He reminds him of John. Despite the years and miles that separate him from his brother, he recognizes in this face the eyes of those who have already seen too much, the same childish look masking a suffering hidden from the rest of the world. Fascinated, he lets himself be touched and lowers his guard.

Still no reaction. Jacob puts his hand on the floor of the vehicle, beside him, to encourage the kid to climb up. The small one does not hesitate a long time and comes to place itself near him, his too short legs hanging in the emptiness. The soldier leans in the Humvee to seize a protein bar which he gives to the child. This time, the child doesn’t flinch and hurriedly grabs the gift, observing it from every angle before finally reaching for the wrapper and stuffing it into his mouth. Jacob bursts out laughing at the sight of the cereal bar, much too big for the small mouth of the child, of which five good centimeters exceed his lips.